Munga 2018 - Chasing Ghosts and the Virtue of Cowardice

One of the benefits of being a competent cyclist who falls short of being awesome is that you get to race someone you know you can beat—yourself.

Once the race has started and the initial mania has settled down and I'm riding at a pace that I'm comfortable with there are only 2 riders that I am concerned about—me and me from last year. There is nothing to be gained about worrying where Marco, Guy, Benky, Leon, Ramses or anyone else is for that matter. The fact is they are far better cyclists than I am.

I've trained hard for this race. Harder than I've ever trained before. But it hasn't been motivated by the thought of beating any of those guys. My training motivation has simply been to ride faster than I did last year. 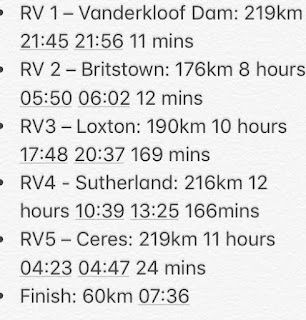 As I've done for other races I've compiled a list of my in and out times from the previous year and it'll tape that onto my bike so I can constantly compare my progress. This is much like the ghost rider on my Garmin which I think they call a virtual partner. I've considered using the virtual partner function on my Garmin but I've found it gives odd results. What I am going to do is set a overall target for myself which I said in a previous post is 61 hours 50 minutes. The race is 1076km so that means an overall average speed of 17.4 km/h. I'll turn off the auto pause on my Garmin and pull up my average speed. As long as I keep it reading 17.4 km/h or more I'll be on target. Sounds easy but your average speed sinks quickly when you are standing still at a water point or race village. When you sleep you wake up to a depressing number which you then have to push up by riding hard.

Last year I managed 16 km/h as an average speed. I've worked hard in the hope that I can get that up a paltry 1.4 km/h.

Now to address the cowardice part.

Mrs Robinson and I were sitting around drinking post ride coffees, as we do 4 or 5 days a week, and the topic turned to the thought of wanting to quit while suffering on the Munga. I have to admit the thought crosses my mind every race. In fact, almost every day of every race. I don't think we are unique. It gets tough out there.

Mrs Robinson gave it some thought and added, "But you need a good reason, you can't just quit." He then articulated what he thought were acceptable reasons for withdrawing from the race. Acceptable in that they didn't make you look weak or pathetic. His list included, but wasn't limited to, being struck by a crashing aeroplane, maimed by falling space debris and being attacked by a bear. He went on to elaborate on the bear attack saying a few scratches were insufficient, the bear would at the very least have to rip your arm off. That we don't have bears in Africa is of no consequence.

When I got home and regaled my wife with the details of the post ride conversation she thought about it for a minute then summed it up in a sentence, "What you are telling me is that everyone who finishes the race is a coward because they are too scared to just quit." Think about that and then resolve to be a coward.