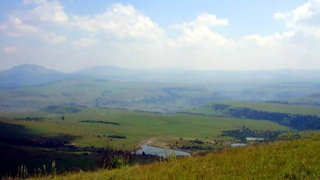 The ride to Vryheid takes us away from the train track which has been our lodestar. We'll be riding district roads for this leg. We've done the first 60km's previously albeit in terrible conditions. Beyond that it's all new and we don't know what to expect.

We make good progress out of Volksrust to Groenvlei and begin the climb up to the highest point of our route. A third of the way up we stop to eat the remains of the dinner we bought in Volksrust. Now that it's cooler we have regained the appetites that were MIA earlier. There's evidence of a lightning storm nearby but we can't figure out where it is. We simply see the occasional flash on the horizon in no particular direction. The cloud cover is light and we can see stars. I'm hoping it's far away and not along our route. Our last ride attempt spluttered out 20 kilometres further along this road near Utrecht. Im not keen for a repeat performance.

Back on our bikes we continue our ascent. We both have the route profile page open on our Garmins. The line rises sharply off the page. I keep riding desperately waiting to see the elevation profile flatten out. It does briefly before kicking up even sharper. It's a long grind and we eventually top out at an elevation of 1965m. Niven has been waiting at the top of the climb. We feel bad for stopping to eat and keeping him waiting. It's almost 10pm, he has been on the go since before sunrise and must be tired. Sure we've been up just as long but I'd rather be pedalling than sitting around doing nothing waiting for a couple of cyclists to make an appearance.

We chat to Niven who indicates that he is going to continue tagging along until we get to Richards Bay. That's his level of interest in seeing people do this route. He's as excited as we are to put down a good time. We roll off leaving Niven to pack and stow his lights and camera.

Now that we are at the top of the climb we can see where the lightning is coming from. There's a storm directly ahead and by my reckoning it's near Utrecht. We can see the flashes of lightning but we can't hear the resultant thunder. That's a good thing. Merak and I keep moving with neither of us saying anything about the storm we are riding toward. The wind is blowing across us so I hope it'll move away and leave us alone.

In our last attempt this section was muddy and we crawled along into a headwind while being lashed by torrential rainfall. This time the dry surface and gentle crosswind means we belt along at a good pace losing 400m of elevation in the process. It feels great to be moving along easily. It takes Niven 15 kilometres to catch up. As we approach the turnoff near Utrecht we can see lightning bolts and hear the thunder. The storm is directly over town 10 kilometres away. It's not good. I'm happy we'll soon be turning left away from town. As we approach the junction there's one last massive lightning bolt followed by nothing. Just like that the storm has blown out.

We inch up the next climb. The lights of Utrecht are off to our right. We are now in unchartered territory. We are almost halfway to the coast. The route profile that Carlo provided us with shows we are on a gentle glide slope from here to the coast. But the numbers suggest there is more to it than that. We have climbed less that 2000m and the total climbing for the route is 6000m. Somewhere between here and the coast  there be dragons. Lots of dragons.

The first dragon comes up soon enough. The top end of my cassette gets 18 minutes of solid workout to cover a mere 2.5 kilometres. Hmm. One dragon down, how many more? The ride into Vryheid uncovers no more dragons. By contrast it's a nice ride with a good number of rolling hills. Our original plan had us getting to Vryheid around 1am. We have made up some lost time and are in town at 1:30am. We find a garage shop and takeaway that is open. Niven's motorcycle is parked outside.