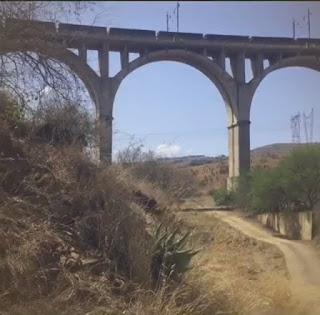 It's 2am. We've eaten our toasted sandwiches and had coffee awful enough to ward off the most resilient of sleep monsters. The ride out of Vryheid is fast. Before long we are adjacent the rail line that runs from the coal fields in Ermelo to Richards Bay. The first train passes us. It's in a cutting below us and it's dark so we can't see it. I've no idea of how fast it's going or even in which direction. It seems this line is different from the one we followed to Volksrust. The coaches roll past smoothly and they go on and on and on.

By the time the eastern sky shows signs of a new day the landscape starts changing from flat and fast to undulating. The railway line is fairly level thanks to endless bridges and cuttings. Apparently there are 65 bridges and around 14 tunnels between Richards Bay and Vryheid. Obviously we can't ride across the bridges so have to ride down below the bridges and then make our way up above the line when it goes through a cutting and even higher when the line is swallowed by a tunnel.

The route profile shows a gentle glide slope from Vryheid to Richards Bay but the devil is in the detail. The 230 km's from Vryheid to the sea includes a few thousand metres a ascent. All made up of short steep climbs.

We stop for a few minutes as it's getting light. A train comes past. It's then that we get to see just how long the train sets are. 4 electric locomotives pull 200 coaches. They come past so fast that they create enough wind to buffet and chill us even though we are a good 20 metres from the tracks. The line is busy. For the rest of the day we see trains heading to and from Richards Bay at regular intervals. The electric whine of the locomotives can be heard from kilometres away.

We enter a valley where we spend the next hour and some plummeting down rocky descents followed by snail paced climbs. It seems the bridges are spaced every kilometre or less. At one point my chain drops off and ends up wrapped around my crank. I don't have my usual tool bag which went missing between the finish of The Munga and fetching my bike once back in Johannesburg. I don't have any chain links or my chain link remover. Merak and I manage to remove the crankset and untangle the chain and straighten out the twisted links.

A short while later my back tyre is flat. I top up the sealant and pump it up. A while later it's flat. We pump it up again. A few kilometres on and once more it's flat. On closer inspection we find the tyre has a sidewall cut. I normally carry mushroom plugs for sidewall cuts but they were also in the bag that went missing. We try inserting tyre worms which work for a few kilometres before failing. Merak eventually suggests we insert a tube. That means getting all the thorns out the tyre. I don't like that idea as it's going to take forever. I have a basic tube patch kit with rubber cement and patches. We pop the tyre off, dry the inside with my buff, scuff up the tyre with the small square of sandpaper. I squeeze on a good dollop of glue and pluck the largest patch over the hole. We bomb the tyre and the patch holds. We're on our way again.

After countless ups and downs we cross the Mhlahlane river climb up through Mbudle village and drop into Ulundi where we pop into the local Wimpy for breakfast. We're tired and the fun has long since worn off. Merak has an appetite. I don't and just force my food down. We've only got 113km to go but it may as well be 1000km. The incessant climbing has knocked the stuffing out of me and I know there's a lot more to come. We've been going for 28 hours. Any hope of finishing the ride in 36 hours has evaporated. You'd think that 113km's in 8 hours would be a doddle. I guess it would be if you'd had a good nights sleep. We've had a good nights riding. And it's getting hot... and humid.

Without too much enthusiasm I get on my bike and we follow the GPS on a circuitous route out of town. Eventually we are back on the railway service road and the ups and downs are back in play.   Surely, we reason, the terrain must flatten out as we get closer to the coast.  Wrong!!!

With around 50 km's to go we come across a crew chopping up rail carriages. There was a huge derailment in December 2018. They put it down to sabotage. Apparently the line was cut with a cutting torch and over 50 coaches were derailed. There are countless wheelsets scattered along the line. The crew is using cutting torches to chop up the abandoned carriages. We stop and chat with them. A couple of the guys are from Fourways in Johannesburg. Small world.

We keep trundling along. On the outskirts of Empangeni/Richards Bay we come across kids playing in the road. One of them is riding a bmx bike and takes delight in racing us up a steep hill. He wins easily but not without nearly running over a small tot who is watching the action. A swerve at the last moment and an embarrassing scene is averted. The kids are delighted with their friends victory. We smile politely and creep on up the climb. Soon we are away from the settlement and into a pine forest which empties into the town of Richards Bay. The last 15 kilometres are flat and fast albeit through traffic on main roads.

We make it to the waterfront and head down the water break to the finish at the end. Our families are there but Niven popped down to the bank and has missed our arrival. It's 18:30. Our official riding time is 36h24.

Niven arrives a few minutes after us and is as delighted as we are with our effort.

Shortly after we see Werner Nienaber. He'd been waiting patiently at the end of the wrong water break. Its only when the pictures of our finish are posted on the Whatsapp group that he realises his mistake and he scuttles around to join us. It good to see him.

HeidelBay is a good ride. It's as good if not better than a lot of official races. It crosses an interesting g part of the country and it can be customised to suit your requirements. We did it in a single effort but it could easily be divided into 3 or 4 days with overnight stops. It could even be ridden over a number of weekends starting at different places.

We were lucky in that we got a good weather window in a season where rain is expected somewhere along the route.

We did okay and I'm happy with our time. However...