Our Riad is exactly that—a townhouse with a central courtyard and a fountain. In pride of place in the centre of the courtyard is an orange tree laden with ripening oranges. Real ones not plastic —we check. Once through the front door the glumness of the area is instantly forgotten. The place inside is a comfortable haven. It is a scenario that will play out over and over during our trek across Morocco—the outside of buildings often appear neglected in contrast to the inside that is tidy and homely.

Ghislain welcomes us and we have the first of many cups of Moroccan tea—black tea infused with fresh mint. By default it's sweetened with many lumps of sugar. Fact: Morocco has the second highest per capita consumption of sugar in Africa. Our own nation, South Africa, comes in first.

Our first priority is to get local currency and SIM cards. Our host makes a line drawing of how to get to the Medina. The Medina is the central hub of Marrakech. The centre piece of the Medina is the Jama El f'na Market. It's an open air market from which radiates a myriad narrow alleyways that make up the bulk of the extensive central market.

Jama El f'na Market square is our quest. We consult Google Maps to get an idea of where we were headed. More a case of figuring out where we are so that we can make it back to our dingy alleyway. We make a point of getting our bearings and sizing our Google app to include the area we are headed toward as we will be out of WiFi reception as soon as we step outside.

We pop through the door and make our way down the alley. It's evening but you wouldn't know it. Marrakech seems to be in the wrong time zone. The sun comes up after 8am and it goes down after 7:30pm. This suits a town that only gets going midmorning and quietens down close to midnight.

I still haven't got used to the fact that they drive on the wrong side of the road. That's right, we anglophiles drive on the right side. That is, the left side, which is the right side. It takes getting used to when you have to cross a road or avoid scooters which zip up and down in an endless stream. Occasionally I just stop to methodically figure out in which direction I should be looking.

Our Riad is on the fringe of the Medina so it's not long before we merge with the throngs pulsing through narrow alleys. It's a mix of pedestrians and scooters. The scooters zip through the mob occasionally slowing to a walk to nudge through choke points. There's tolerance on both sides. As for me I'm getting whiplash trying to figure out where the next crazed scooter rider is coming from.

The stalls that line the alleys sell everything imaginable. Not only that, there are many of them that are carbon copies of a stall adjacent to them or even identical to a stall a few hundred metres away. It's far too easy to think you know where you are simply because you recognise a stall or a group of stalls. It doesn't work like that. It's not like being on a merry-go-round where you get used to the constant repetitive pattern. It's more like a train passing thousands of similar looking stalls. It's a blur of colours and smells. We resort to Google Maps on a few occasions to figure out where we are.

The stalls are packed to overflowing. I get that you can overstock with shoes, socks or brass trinkets as you will eventually sell them. There is no sell-by-date. But many of the stalls are selling fruit and vegetables. They're perishable. No one in their right mind is going to stock up on 5 tons of fruit and veggies in the hope of selling a couple of 5kg bags. Obviously there're people buying this stuff.

A familiar fragrance gets my attention. A guy eases through the crowd pushing a cart the size of a dining room table. It's loaded with litchi size strawberries. They look amazing. Not a single blemish. This epitomises my thinking about the volume of perishable goods that change hands on a daily basis. Strawberries won't wait for peak tourist season. 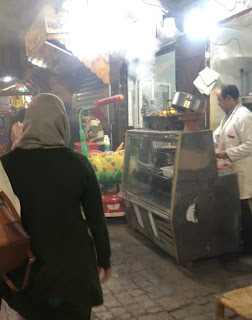 We make it to the central open air market place. It's packed out. Hundreds of brightly illuminated stalls fill the square which I figure is 300 metres x 300 metres. With the help of some tourists who are sitting at a cafe overlooking the square we are able to locate an ATM and a shop that sells SIM cards and airtime. South Africans will be interested in the low cost of data - 5 Gb cost me R76.

Local currency in hand and phones back online our next objective is food. The square is lined with an array of eateries. We settle for Taj'in Darna. I have no idea what to order so just go with the special. Before long an earthenware tajine is placed before me. The lid is lifted and I'm presented with a dish that is as Moroccan as it gets. A tajine is basically a stew of varying combinations of veg and meat slow cooked over coals in the earthenware pot. It's followed up with a pot of Moroccan tea. If I'd have added a Berber omelette to my meal I would have experienced the perfect Moroccan full-house. Omelettes, tagines and mint tea we're going to be the mainstay of my diet for the next few weeks. After paying for the meal and rectifying a "mistake" with our change we head back to our digs. 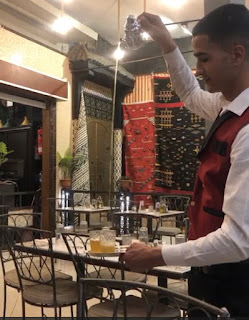 We return to the Medina the following day to meet with a family friend who has relocated to Marrakech from Cape Town. He runs a coffee roastery. We meet at a rooftop restaurant that is a customer of his. He is a great source of info for our upcoming trip. One bit of advice that sticks in my head is, "Watch out for scorpions, they are deadly." 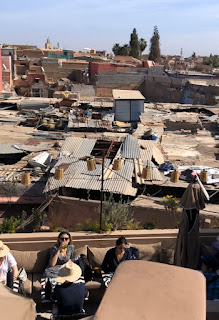 As we look down from the top floor of the restaurant the Medina below looks like a construction scrap heap. It's hard to believe there's a mass of humanity making its way to and fro along the myriad narrow alleyways beneath that rubble.
Posted by Mike at 20:39