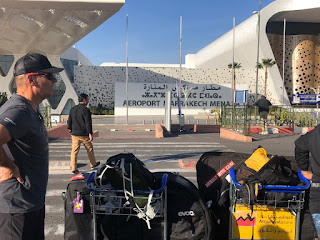 The wing dips as we make our final turn into Marrakech Ménara Airport in Morocco. I've got a window seat and all I can see is an endless expanse of desolate brown. As we descend I see occasional patches of green that look like orchards. Olive trees I guess. Then there're huge expanses of plastic clad structures which I assume are green houses surrounded by barren ground.

The town of Marrakech looms. It's unspectacular. The brown tones of sprawl melt into the featureless landscape. It's flat, dry, brown and completely underwhelming. Is this mystical Marrakech I ask myself? From the air it looks more slum like than mystical. To be fair I'm not well travelled and part of the reason I've come here is to break out from my shackled experience and see and do something different. Well... not exactly do something different—my bike is in the hold and I'm here to do a bicycle race across the Atlas Mountains. I'm probably the worlds worst traveller. I don't like flying and I dislike the unfamiliar even more so I'm really not qualified to judge. But still, I expected a little more from the Marrakech I've heard snippets about over the years.

Disembarking we enter the airport building which is surprisingly modern compared to what I saw from the air. We (I'm travelling with Roger Nicholson who is also racing) collect our bags and go through security. In a city of 1 million people that attracts no less than twice that number of visitors every year you'd think the immigration officials would buy into the value of tourism. Not! While they are as surly as their American counterparts they don't mimic them for diligence. Our bags and bike boxes are shoved through an x-ray machine which seems to be a waste of time because the official manning the device is staring off into the distance in the opposite direction of the the screen he is supposed to be monitoring.

We get outside and find a guy next to a transfer company banner holding a clipboard with Roger's name on it. Cool. Time to load up and get to our accommodation. Lots of foreign language banter between a couple of guys while we are ignored.

The boredom is interrupted by a gendarme who walks over to a smouldering bin into which he pours a bottle of water. There's a heated exchange between the cop and an airport worker that ends with the worker taking the now extinguished bin and placing it with a collection of recycling containers 50 metres away. It seems the entrance door of the airport is not a good place to leave a paper recycling bin.

Eventually we are escorted by a handful of guys to our waiting transport. Lots of hands help load our bikes and bags followed by expectant looks as we are about to drive off. This is our first experience of tipping expectations for unsolicited assistance. Apparently it's rampant in this town. We've just arrived and have no local currency so they get left behind empty handed.

As soon as the first world vestige of the airport building is out of sight we are transported into another world. I expect to see Aladdin zipping past on a flying carpet. The traffic flow is best described as organic rather than structured and systematic. But it works. There are no honking of horns or scurrying to get ahead of the next car. Motor cycles, which number as many as cars, and cyclists are given space and there's a harmonious weaving of traffic at intersections. The road makes its way through the palace grounds and in a few places the traffic is shoehorned through a narrow space in the outer walls. Only one direction of traffic can go at any time and they figure it out without any aggro. Soon we are through the palace grounds and enter, what to my untraveled and unaccustomed eye looks a dodgy part of town. We are on a street with an assortment of little shops packed together. A bakery, a car parts shop, a motor cycle repair shop, a store selling airtime, cigarettes and various food items. All of these stores having no more than 3 metres of shopfront. A few men are clustered together sharing food.

As I'm checking out the dodgy neighbourhood the taxi stops and the driver declares we are near our hotel.

"I can't drive closer, you must walk."

We unload our bike boxes and suitcases and stare down the dingy alley. Bike boxes aren't dainty wheelie bags. They are heavy and take some handling to wheel along. Roger and I head down the alley dragging our bikes and carrying our luggage in search of Riad Bousskri. It should be number 3.

A Riad is a traditional Moroccan house. The term comes from the Arab word 'ryad' (meaning 'garden') but is applied to townhouses built around an inner courtyard or garden with a central fountain or small pool. Many now operate as boutique B&B's.

We head down the narrow alley dodging motorbikes as we go in search of our boutique hotel. Number 3 doesn't appear. We are standing with our stuff staring both ways down the alleyway when we get a gents attention.

Roger nods. With that the guy grabs one of Roger's bags and heads down a narrower darker alleyway. The houses are built over this alleyway which makes it dark even though the sun is a few hours from setting. 30 metres down the alley the guy stops and points into a gloomy recess. We think it's a doorway. It's too dark to see. After some gesticulating the guy takes out his lighter and strikes the flint. He holds his lighter up to the wall next to a door. A small name plate appears out of the gloom. It seems we have found Riad Bousskri.

Going to be following this adbenture