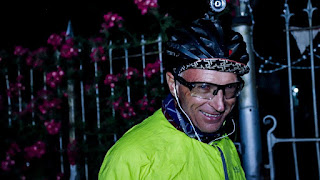 For those who like to crunch data I've listed my times for this years race. The time in brackets (...) are the times I posted before the race to indicated what it would take to achieve a sub-48 hour finish. It was close. At one point I thought I could have finished at least 2 hours faster but the wind on the second afternoon, particularly heading south along the Fish River near Cradock was brutal and then there was heavy fog coming off Schurfteberg that cost me at least another hour.

I crested the Schurfteberg just before midnight which means I should have finished around 03h00. The first sign of trouble was as I neared the top of the jeep track. Fog began curling over the crest and coalesced into large drops on my glasses. My glasses are more than a cool looking fashion accessory—I need them to see where I am going. As the fog had only started 100 metres from the top I assumed the same would be true when going down the back end of the mountain. The initial part of the jeep track drops 300 metre over a distance of 3km. It's a stunning descent with a number of sharp switchbacks and is a lot of fun if you've got the skills to race down the mountain. I'm thin on those kind of skills, even on a good day. But at midnight in a blinding fog it became more of a challenge. I tried drying my glasses but within 20 metres I was once again unable to see. When it became clear that the fog was going to persist longer than I had hoped I decided to ride without my glasses which is something I've never done before as my vision without glasses is such that at anything more than a metre I can't distinguish between a catfish and a hedgehog. Trying to steer a cleanish line down the rock strewn jeep track and figure out which way the track swung without popping over a precipice was a tad hair raising. It would have been safer and easier to walk but it's a long way down and time wasn't on my side. The steepest part of the descent ends at a gate which I spotted a few seconds before I would have attempted to chip myself through the wire mesh of the gate. Fortunately enough I was going so slow that if I hadn't managed to brake in time I probably would have gotten away with a collection of interesting bruises. The next 2 kilometres of jeep track is a series of water bars that would make a cool pump track. And like any good pump track it snakes at random intervals. The fog hadn't let up and my usual exhilaration was seriously dampened as was my speed. Talking of dampened, I was soaking wet. Once back on a good farm road I stopped to put my raincoat on. While still hopeful that the fog would dissipate I had to tolerate it for the next 15 kilometres. What is normally an exhilarating 20 kilometre 60 minute fun ride became a 2 hour slog. Having not slept for the duration of the race I had now gone 45 hours without sleep. That's longer than I have ever managed before. I was aware that the longer I shuffled along the bigger the risk of falling asleep on my bike. Eventually the fog thinned sufficiently that I was able to get over the Swaershoek Pass and make my way down the final 20 kilometre descent to the finish.