My Year in Sport Stats 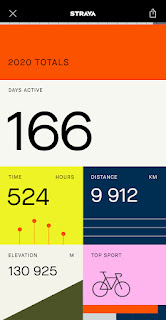 Each December Strava sends its members an email extolling their sporting achievements for the year. It's pretty cool to see the number of kilometres ridden, accumulated vertical ascent, hours in the saddle, etc..

I've got a few thousand kilometres, hundreds of hours in the saddle and a chunk of ascent missing. Most of that for the sections of the Freedom Trail that I rode this year.

If you want to talk about your riding achievements then make it about what you did between pedal strokes and not about the stats. The stats are a blunt measure of achievement. They should be merely an armature upon which to hang your experiences.

I rode something like thirteen thousand kilometres this year. What did that do to shape me?

Pre-Covid lockdown I ventured abroad with my bike for the first time. I experienced a culture far removed from my day to day. When I stopped pedalling in a town in the middle of the arid western region of Morocco I met a shop keeper who didn't speak my language as I didn't speak his. That didn't stop him from inviting me into his home to share dinner with his family. With the use of Google Translate we spent hours trading stories. While that family did not appear to be wealthy by our standards, what I witnessed was a richness that challenged me. There was dignity, respect and hospitality dispersed without effort. Not only to me but to each other.

A few days later I got to share the lunch of two school teachers who didn't hesitate to take a stranger into their home. Over the course of our conversation it became clear that outside of our particular cultures we have so much in common. On a dusty and parched plateau many kilometres from the closest water supply we drank Moroccan mint tea while the issues of Brexit, the USA under Trump and the challenges of the Middle East and how those events ripple across the globe, were the topics of conversation.

Back home in South Africa during the first weeks of lockdown I entered an online race that took 17 uninterrupted hours to complete. My memory of that race wasn't the challenge of riding through the night while ensconced in my spare room staring at avatars scuttling around my screen. After the race was said and done I got a message from another rider. He said although we didn't know each other he was motivated by watching my race and getting back on his bike whenever my avatar caught up to him. His objective was to beat me and beat me he did. I had the pleasure of reconnecting with him after he finished the Munga. The message from him, "I was actually thinking of you on the road. Trying to minimise stopping time..." I wasn't able to do the Munga this year but it seems I was there vicariously at least.

During RASA and Race to Cradock, while intent on doing the best I could I found myself eschewing my normal practice of getting through support stations in as few minutes as possible. It cost me time but that was of little consequence. Once again, it was the time spent between pedal strokes talking to hosts and spending time with fellow racers that added colour, texture and richness to those rides.

And what to say of the countless cups of coffee shared with riding mates when out training or riding for fun. The hours spent on idle chitchat or discussing the tribulations and triumphs of lockdown life. Those hours spend off the bike helped alleviate the challenges.

The cycling Stats for the year look good. I've grown as a person. I'm more appreciative of people not like me. I've received wise council and hopefully dispensed a fair measure of the same. I've made new friends and deepened bonds of friendship and trust. Yes, in spite of the challenges, it's been a good year with the bike.