Durban Dash – Riding into the Sunset 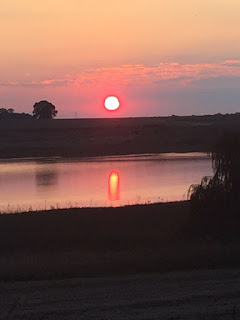 Photograph: Jacques Swart
I like the idea of riding across large chunks of our country. It's cool when you can push pins into a map and join them with cotton thread to show where you rode. The Knysna to Cape Town versions of the Cape Epic pinned up on the map looked just that — Epic! The new format clover leaf patterns are dead boring. It was the idea of traveling from Knysna to Cape Town on my bike that first piqued my interest in the Epic. It was more than a race, it was an adventure, it was a journey of discovering new parts of our country.
JoBerg2c ticked the same boxes. By the time I added my Freedom Challenge and Munga rides my ride map looked spectacular.
And then Durban Dash popped on on the race radar. It traces a cool line between Johannesburg and Durban via the Sterkfontein Dam. The idea of riding from Jozi to Durban is not new. Many clubs organise rides to Durban. Many of them to coincide with Amashova.
I haven't heard of anyone who rides back to Jo'burg after Amashova. That's actually not that surprising as I'm sure there are many people on the Highveld who wake up some mornings and wish they could skip work and rather drive to Durban. As for Durbanites waking up with a Jo'burg hankering ... nah.
Durban Dash is so much more than a club ride to Durban. It foregoes the social aspect of multiple overnight stops en route and compresses the effort into one big push. It is essentially a nonstop solo effort. Even if you choose to ride with someone else you spend most of the time in your own headspace.
It's a tough race that attracts tough people. Tough but nice — there's no space for big egos in a race like this.
It's a pity there aren't more people entering the event. The lack of uptake will be its downfall, particularly the Up version from Durban to Johannesburg.
Apart from the challenge of tracing a 615km line between the two cities, it is a great conditioning ride for other big rides like The Freedom Challenge Race Across South Africa, The Munga or the sister races from the Massive Adventures stable; Trans Afrika or The 1000 miler - www.massiveadventures.co.za
At 5 AM last Thursday I swung my leg over my bike at Thaba Trails near Mall of the South in Johannesburg South and pointed my bike in the direction of Durban.
Ahead lay 615km of road, 38km of it over rough dirt roads. My bike of choice  was my road bike complete with skinny wheels. I knew the dirt sections were going to be brutal but figured I could suffer through them for a couple of hours and enjoy the benefit of a faster machine for the balance of the ride.
The race is a mind game. It's a case of simply ticking off the hours and kilometres. Yes, it does get incredibly boring at times but that is part of the challenge. The dirt road sections were ugly. Particularly the nasty stretch I encountered a few hours after midnight heading out of Mooi River toward Curry's Post. By then I was sore, tired and 22 hours into my ride. The rutted road sent shudders  through every part of my body.
I finished the race in 29 hours and 15 minutes. While good enough for second place it was way behind Christo van der Heever who pedalled to the finish in 24 hours 43 minutes — an impressive ride.
There are no prizes on offer in this race and the reward is purely the personal satisfaction you derive from the race. That being the case it was mission accomplished.
I now have 4 Durban Dash's under my belt — two Up and two Down.
Why do I keep coming back? I don't know. They are hard races that make me question my sanity and push me to the brink of backing off and settling for an easy ride into the finish. When rattling over gnarly dirt roads the wrong side of midnight or crawling downhill into Mooi River in a freezing fog that reduced visibility to less than 5 metres you have to ask yourself "Why?"
Against reason I keep at it and am surprisingly left with a real sense of accomplishment. Endurance cycling is an odd space shared by few athletes. Ultra Endurance athletes are an even smaller subset. In the ultra endurance world I am merely a dabbler but I understand the sentiments of those who choose to play in that arena. I came across the following excerpt published by the Calgary Herald. It was part of an interview with Craig Stappler ahead of the 2013 version of the Tour Divide.
"Yeah, sometimes I catch myself wondering why do I do this. Why can't I just do normal rides?" he asked, without answering. "Do we all have something wrong with us? Do we have something to prove? I don't know.
"You really get the ego pounded out of you. After 15 days of everything you've got, you're so totally stripped down that you have a kind of openness… It's pushing yourself and challenging yourself. Yes, it's tough, but there are great moments.
"It's all part of the adventure."
I guess the answer lies right there ... It's all part of the adventure.
Posted by Mike at 20:55 1 comment: 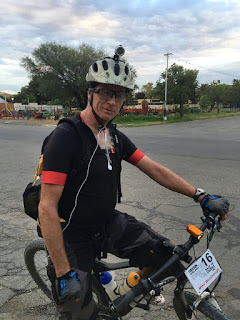 Waking, it took me a second or two to make sense of my surroundings. Ahead, and at the foot of the mountain pass, the lights of Cradock, my objective, twinkled in the predawn darkness. To my right, on the fringes of the bubble of light cast by my bike light, I could see the rock face of the road cutting flashing by. To my left a chasm of darkness. I applied the brakes and brought my bike to a stop. I was too close to the finish to end my race in a crash on the final descent.

I propped my bike against the rocks, set my alarm for five minutes and sat in the ditch with my back to the rock face. Within seconds I was asleep.

During a week dominated by the ABSA Cape Epic I rode my bike across the Eastern Cape from Rhodes to Cradock. The Race to Cradock, an event of the Freedom Challenge, could be described as a boutique event. It's niche in that it is very limited in numbers and attracts a particular type of rider.

If razzmatazz, daily post race massages, cold beers at the Chill-Zone, photographers around each corner, fully functioning water points offering an array of refreshments, nightly gatherings to highlight the performances of the day, prize-giving and daily results posted to see who is edging out who, is your thing, then the Race to Cradock is not for you.

If you merely want to experience the simple joy of riding your bike or fancy pitting yourself against yourself then perhaps you would feel as at home on the Freedom Trail as I do.

I had been on the go for nearly 49 hours covering 570 km. In that time I had only banked 25 minutes of roadside sleep. I was only thirty minutes from the finish line and had finally lost the battle against the sleep monsters who had been tormenting me for the last hour.

By the time I opened my eyes the Eastern sky showed the first signs of the advancing dawn. I hopped on my bike and rode the final 15 kilometres into town.

It had been a good race. I had ridden hard and I ridden long. It was my best performance to date over that section. It was completely satisfying and made me feel alive.