Riding the Munga? Be sure to pack your Bottle-Sox.

During Munga 2018 I found myself in the the heart of the Tankwa Karoo in the middle of the day. The temperature was in the mid 40's - in the shade. A scorching wind added to my discomfort. I was dehydrated and although I had water it was as hot if not hotter than the scalding heat I found myself in. Hotter because my bottles were exposed to the midday sun. I knew I had to drink but water the temperature of hot tea wasn't going to fix my immediate problem.

There are some people who suggest that you should drink warm water rather than cold water to aid your digestion. Did I mention that I was in the middle of the Tankwa Karoo and not dinning at a Ritz-Carlton hotel? In any case those people are delusional and very wrong.

From the research I have read it seems that If you are hot and dehydrated the temperature of fluids you drink should ideally be 26°C (considered to be room temperature) or lower—certainly lower than body temperature. As you get dehydrated your body starts reining in  the amount you sweat to preserve your state of hydration. Ingesting fluids above room temperature can trigger an episode of extreme sweating. Think about how a cup of tea or coffee after a hot day ride triggers rivulets of sweat that cascade over your face or down your back.

It's a delicate balancing act of trying to retain hydration and still have a measure of thermal regulation. It's a space people should avoid at all costs. Unfortunately given the extreme environmental conditions of an ultra-endurance race that traverses a desert in the height of summer it's a reality that most Munga athletes will be faced with.

It's a complex subject that is further complicated when the fluid isn't just plain water and also contains carbs. In short, hot and sweet is a useless combination to be swilling out of your water bottle or sucking through the tube of your hydration pack. I'd had this problem before and knew I had to get the temperature of the water down if I wanted it to do me any good.

To cool my water I wrapped one of my bottles in a buff and dampened it with a little water from another bottle. By the time the buff had dried 20 minutes later the water was cool enough to drink. It was a case of necessity being the mother of invention.

Evaporative cooling is not a new idea and I have even designed and built my own coolers but before my desperation driven solution in the Tankwa it never occurred to me that the principles could be put to good use to cool water while riding through hot arid regions.

To understand how effective this cooling can be lets examine the science behind why this works. Refrigeration 101 teaches that things are not made cold but rather that heat is removed. It appears a subtle difference but it's an important one. During the phase transition of water to water vapour (changing from a liquid to a gas) a lot of heat is used to achieve that change and that heat is dissipated in the resultant gas. We experience this principle in action when we get hot. The heat causes us to sweat and the sweat evaporates and our skin is cooled.

I'm old enough to remember the canvas bags that people dangled from the bumpers of their cars and bakkies in the 70s in order to have cool drinking water. Being made from canvas meant the bags weren't waterproof and as a result they continuously "leaked". The outside was always a little damp and it was that continuous evaporation of the outside skin that resulted in the heat being removed from the water within.

There is a direct link between air humidity (relative humidity) and wet bulb readings. In high humidity conditions the evaporation rate is greatly reduced as compared to arid conditions. Practically you have probably experienced how long it takes to dry a towel in midsummer humidity such as we get in Durban compared to the swift drying time of a wet towel in the dry Highveld air of a Johannesburg winter.

The less humid (drier) the air the greater the differential between dry and wet bulb readings. Evaporative coolers (often called swamp coolers) used to cool buildings make use of this difference. An evaporative cooler used in Johannesburg is a lot more effective than one used in Durban. As a consequence you don't see as many evaporative coolers being used in humid coastal conditions.

I couldn't find any reliable dry/wet bulb readings for South Africa but found some for the USA. I figure that Las Vegas in Nevada is similar to the arid conditions we have in the Karoo. When it's 42°C in Vegas the wet bulb temperatures are often as low as 19°C.  That's a huge differential. Good evaporative coolers reach efficiencies of up to 85%. That is, they lower the air temperature to 85% of the difference between dry and wet bulb temperatures. In the Vegas example above they should be able to lower the air temperature going into the building from 42°C to 23°C.

Armed with that information I worked on finding a permanent solution. I considered making a fabric sleeve that could slip over a bottle. It had to be a material that would easily absorb and hold water and then easily release that water via evaporation. When you are riding in a desert water is precious, I don't want to waste water trying to wet the sleeve.

I considered different materials including neoprene before the obvious solution popped up —orphan socks. Who doesn't have a collection of those? I found a lonely ankle high sock and slipped it over a bottle. I used a white sock but after a few hours on the trail it may as well have been a light brown one as it is now a permanent shade of dirt. 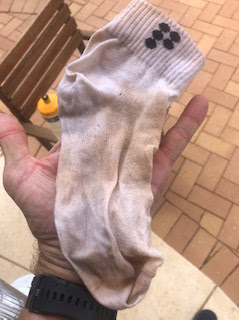 The option of neoprene or a thicker sock was discarded as the bottle wouldn't fit easily in my normal bottle cage and neoprene proved more difficult to wet. I never got around to testing it's evaporative qualities.

It turns out my ankle sock worked fine. I like that it's a little too long as I fold it over at the top. This forms a cuff that acts as a little water reservoir that then wicks down into the lower part as it dries through evaporation extending the cooling effect.

Here is a summary of my tests.

To simulate the effect of cycling I had a fan blow air over the bottles as they stood in the sun. 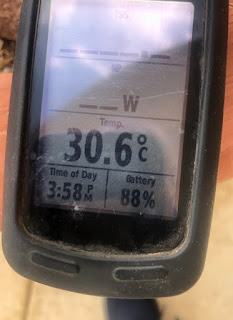 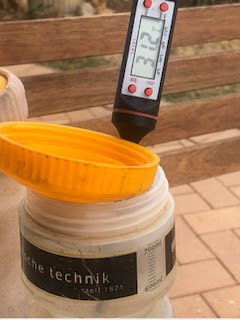 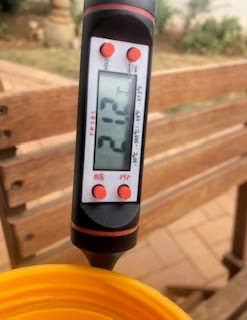 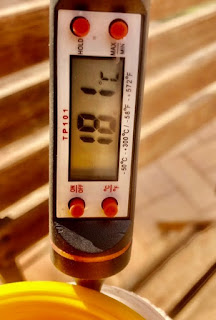 The cooling effect of the wet sock seems to surpass the efficiency of a building evaporative cooler. This based on the fact that I have an evaporative cooler installed in my home and the temperatures do not get as low as those I measured in the wet sleeved bottle.

I would expect to reach efficiencies approaching 100%—that is, the same as wet bulb temperatures. This seems obvious as we are effectively employing the wet bulb methodology—wet fabric and air flow. Having said that, in the arid conditions of the Karoo the sock would dry quicker and it might be too quick to effectively reduce the temperature through the entire volume of water in the bottle. If you were able to wet the sock twice you would get close to wet bulb temps as demonstrated by the results I got from wetting the sock a second time. The fact that the sock would dry quicker in the Karoo isn't a bad thing as the faster it evaporates the  greater the cooling effect.

In practice you would probably wet the sock at a water point which would keep the bottle contents cool for about an hour. After that, given the scarcity of water I would only wet the sock about 20 mins before I planned to drink from it. It would be a waste of good water to continually wet it. Best thing is you can wet the sock with any water even if it's dodgy. You can dip it in reservoirs that you pass and If you're desperate you can even pee on it.

I have tested this method while out riding and was able to wet the sock 5 times using about 250ml of water. It's a fair price to pay for cool water.

Once the bottle is empty you can either top it up or move the sock to another bottle.

The effectiveness of this method on an insulated bottle would be reduced. The close contact of wet sock/bottle plastic/water of a standard bottle makes the heat transfer efficient. An insulated bottle designed to keep water cooler for longer would have the same inhibiting insulation effect when trying to pull heat out of the bottle contents.

Traversing the Karoo in summer has given me fresh appreciation for plain cool water. I'm definitely taking some socks along for the ride and I suggest you raid your sock draw and give it a try ahead of the Munga. If you do try it come November 27th I'm sure I won't be the only one sporting ... hmm we need a catchy name... let's go with Bottle-Sox. Cheers! 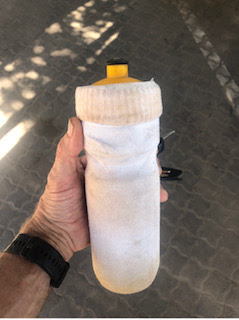