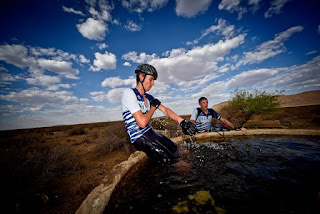 James and Michael cooling off.

I wake to the sound of footsteps crunching on the gravel outside the shed. It's Erik. I've been asleep for an hour. I check the temperature and it's still in the 40's. I'm not going anywhere right now. I shift closer to the door where there's some air movement. I've no idea how many people have ridden past while I was sleeping. As I lie there waiting for it to cool off I see Martin, Michael and 1 other as they ride through. None of them stop to get water from the tap. I'm told later that the windmill that refused to help me was gushing water when they got there. There's another reason they might be skipping the tap. As they round the corner by the farmhouse my bike is visible on the right hand side of the driveway and the tap is directly opposite. They are so busy looking my way that they don't see the tap.

Although it's marginally cooler and the wind, while still blowing, has lost a bit of its venom, the sun is closer to the horizon and reflects harshly off the sparsely vegetated landscape. The next 42km's to WP6 at the farm Pampoenpoort is not particularly challenging nor is it particularly inspiring as it's devoid of landmarks. There are 2 sections across farm roads that empty out on a long straight district road that ends at the junction where the farm is located.

I wind along the jeep track that takes me to a district road that serves as a small link to the next farm track. This next section is tedious. It's into the wind, rough in places, straight as an arrow and mostly uphill. Martin pops up just in front of me. He deviated from the route to get water from a farm house—he obviously didn't see the tap at my farm shed Airbnb. Up ahead I see 2 specks which I assume are riders. Martin and I ride in proximity of each other until we get to the final district road. I stop to rearrange my water bottles and dampen my BottleSox. He wiggles ahead.

One road and 23km to go. Add a gentle gradient, a headwind, a dollop or two of fatigue and bake for 75 minutes. As simple as that I'm in at WP 6 as the sun is setting. Martin arrived there a few minutes ahead of me in the company of Michael and James. I've no idea where James came from and thinking back it must have been him I saw passing me while I was in the shed. I thought he was far ahead.

There's a crowd gathering. Erik and a few others whom I assume are medics are on the front lawn trying to get a photographic drone to cooperate and it doesn't look successful. It's squatting on the lawn winking at them. Apart from the 3 riders who arrived just ahead of me Dana is still here. John who passed me a few kilometres before the abhorrent windmill has already pushed through. I'm glad. He caught up to me while I was negotiating a gate and told me he was going on the charge. We did the fist bump thing and wished each other a good and safe ride. He then scuttled off at a pace I envied.

Pampoenpoort at 524 km is just shy of halfway in the race. It comes at a critical point. In order to prevail in ultra endurance racing you need a quiver stocked with a variety of arrows. In the first few hours of the race all you need is speed. Being hot as it was the next is the ability to cope with the heat. After that it's about managing your nutrition and hydration and then the game changes once you need to deal with sleep deprivation. Pampoenpoort is where sleep or rather the lack of it and how you manage it becomes a critical component of the race.

Michael is busy loading up with tucker while James and Martin are more interested in finding a quiet spot with a mattress. Dana is sitting on the patio watching the guys trying to coax signs of life from the immobile winking drone.

Our hosts are ultra helpful and friendly which gives the place a good buzz. They have Oros orange squash and I waste no time filling my bottles with it. I'm tired of weak lemon flavoured sports drink.

Bottles sorted my thoughts turn to food. Apart from a wide assortment of dinner type food they have Weet-Bix and for the first time in the race I've laid eyes on food that I know is going to slide down my throat without effort. I pop a few bix into a bowl, pour over milk and coat them generously with sugar. They are so good! I brew a coffee and press repeat on another bowl of Weet-Bix. Now fortified I'm ready for the ride into Loxton.

Michael is out the door 5 minutes ahead of me and Dana is busy readying his bike as I leave. With the other 2 looking to nap that means I'm back on the road in 7th place.

It's 71km to the next Race Village and it's predominantly uphill. This section hasn't been kind to me over the years. I've been swarmed by sleep monsters when going through at night and fried by the sun during the day. I've no fond memories of this section and head into it with the enthusiasm of an Australian soldier ordered over the top at the battle Gallipoli.

I'm 8 kilometres out of the water point and I can see a bike light behind me. I'm nodding off and I'm looking for somewhere to lie down. I'm off my bike watching Dana close the gap and zoom past. To his question I reply that I'm okay. I'm watching his rear light recede and decide that I may as well chase after it as it'll give me something to focus on rather than being cocooned in the hypnotic arc of my bike light.

It's working well. I can see his light up ahead and I can also see the arc of light thrown by his front light which means I'm quite close. By focusing on his lights I can anticipate the turn, rise and fall of the road ahead. I'm not tired anymore.

25 kays along the road the wind has picked up and it looks like we're in for a storm. I don't mind at all because the blustery wind is coming over my right shoulder which means it's giving me some assistance. Every now and then it tries to push me off the left side of the road but that's a small price to pay.

The 47km to the tar road before Loxton is knocked off without drama. Well, no drama for me. Dana isn't as lucky. As I get to the tar road he is standing there in agony. His knees are paying the price for his speed. He looks toward the lights of Loxton and asks how long it'll take. I tell him it's at least 45 mins and then a further 15 to get to the Race Village on the other side of town. He looks bemused. I explain that to get to town we can't take the tar road but have to weave through a myriad paths and tracks. He doesn't look impressed. He's out of water so I fill one of his bottles as I've still got 3 full bottles.

With Dana in tow I head through the farm maze that eventually empties into the middle of Loxton. We get on to the road out of town and make our way toward Jakhalsdans Karoo Guesthouse 5 kilometres further on. A kilometre out of town we see a light coming toward us. It's Michael.
"What's up?" I ask.
"Wasn't sure if it's the right way. I don't want to ride 8 kilometres the wrong way and then have to ride back," Michael replies.
He turns and the three of us keep riding. At first Michael is riding strong but soon he starts falling behind. He's battling to stay awake.

We navigate the convoluted approach to the guesthouse and locate the barn tucked away in the farm complex where we are greeted by Ingrid who has been part of the race furniture since the first edition in 2015. We sign the register and Dana and Michael indicate they're in need of a shower and a bed. I'm going to gobble and go.

It's just after midnight so we've been going for 36 hours. At 595 km we are over halfway so it must be all downhill from here.
Posted by Mike at 17:49