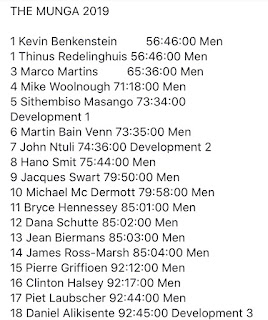 As much as I think age is just a number the reality is that when you are standing neck deep in torn off calendar pages you are faced with the realisation that you can't ride away from that number.

It goes without saying that a thirty something year old has a massive physical advantage over someone like myself who is almost sixty. Therein lies the beauty of ultra endurance cycling — it's not all about brawn. I like to think that as your body yields to the ageing process there is a inversely proportional increase in savviness.

I appreciate that if you go to a gun fight you need a gun and the skill to use it. A one day race is analogous to a gun fight. The Munga on the other hand is more of a bar brawl. You have to know how to throw a punch as well as knee someone in the groin. Somewhere along the way knives, broken bottles and guns come in handy. Multi-faceted rampaging will keep you from being the first to be ejected into the street.

30 years ago I might have placed more emphasis on my physical condition going into a race. That's not to say that I didn't get into the best shape I could. I did. However, no matter how hard I train I am never going to be a Kevin Benkenstein or Thinus Redelinghuys. My body simply won't tolerate the training load that they are able to put themselves through. My time to recovery after an intense training effort would take too long and result in sub-optimal condition.

Given that physical condition was not a mainstay I could build my race strategy around I needed to figure out how I could prevail against the younger riders. I was under no illusions - I was never going to beat the best of them. My audacious goal was to finish inside the top 10. That meant I'd have to beat a good number of strong riders.

If I have any super power it's the ability to keep riding with the minimum of sleep. This skill was stashed for the bar fight. But it wasn't enough. Apart from that I planned meticulously mapping out times and distances between water points and race villages. Experience has taught me that even the best-laid plans can and do go awry so I was armed with flexibility. I ended up sleeping well before I'd planned to but given the circumstances it was exactly the right time.

If you are going to be a habitual bar scrapper it won't do if you can only take one punch. The best brawlers can take one to the jaw and shake it off. There were times where all I wanted to do was get off my bike and call it a day. To counter that I had programmed my headspace with a version of Muzak (elevator music) that looped endlessly. The constant refrain was, "Keep moving forward, don't give up."

It might come as a surprise to some but the thought, "This race is stupid, why am I doing it?" is as common among the front of the field as anywhere else. Every long race I do is definitely my last one and at some point every day of every race there are moments when the only rational thing to do is quit. Endurance racing isn't fun. But it's satisfying beyond comprehension. That is, once you've finished... and recovered.

I had a good race. I'd even say I had the perfect race. Conditions were tough but they were expected and I'd prepared for them. The best preparation was experience. I've learnt a lot from my successes and failures in this event over the last 5 years. My failures in particular are rich pickings for improvements. I wanted to be able to come home and have no regrets about decisions made during the race. And that's how it is. My race has survived post-race analysis without criticism being levelled.

Finally, the fight analogy is just that. If there's any battle involved it is the fight against yourself. I'm not alone in wanting to go faster and further or finish higher up. When we stand on the start line it's with the intention of becoming our own hero. There's no malice among riders. We see and understand each other's moments of weakness and inner wrestling. We don't relish others travails. In the greater scheme of things where we finish is irrelevant. Someone asked me if I'd feel the same way about my "perfect race" if I'd placed 15th instead of 4th. It made me think. If 5 or 6 stronger riders had entered or if some of the riders who had entered hadn't been beaten by the elements I might well have finished outside of the top 10. After reflection I'd have to say I did the best I'm capable of which means it was my perfect race.
Posted by Mike at 16:58