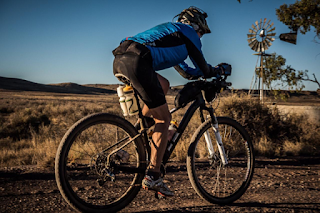 Last year the Tankwa Padstal was where my race ended. This time I'm merely passing through. Another 141 km and I'll be done. I'm in a good space. Physical exhaustion and dilatory thinking and actions brought about by endless hours of pedalling and sleep deprivation become the norm so are ignored as meaningless indicators of how I feel. Even hallucinations can be accommodated without too much concern. Physical pain however, be it saddle sores, ITB or Achilles tenderness, or any pain that would be exacerbated by continued cycling would concern me. As it is I've no red flags.

Michael and Carol-Ann radiate a gentle air of hospitality and warmth that resonates with me. They are calm but attentive and engaging without being exhausting. We fall into easy conversation and I'm well fed and watered and am ready to move on.

Michael assures me that the road is in good shape. That's both good and bad. The good is that it will be fast and I won't be rattling over corrugations. The bad is that a perfect surface lacks stimulation. The road is wide and smooth. It's also a single hue of beige. It's a moonless night and my world consists of what I see in the bubble of light ahead of me. I may as well tape a piece of beige coloured paper to my glasses for all the visual stimulation I'm going to get. A bad road surface would require that I stayed engaged as I look for a better line and avoid obstacles. But right now I'd settle for boring and fast and take my chances with sleep monsters.

I roll out and the road is indeed in good shape. I get an audio book running and get on with the business of putting the next 45 kilometres of dreary gravel behind me. There's one section of 20 km's that is straight as an arrow. In some ways I'm glad I can't see the drudgery that lays ahead.

I've been going for just over an hour and I see vehicle lights approaching. It's still pitch black so I see them from far off. It gets to within a kilometre of me and it pulls to the side of the road and stops. As I approach I see a person standing next to the car. It's Leon Erasmus. He has done multiple Munga's and after countless hours of dot watching has decided to drive to the Padstal and see real people. I'd posit that he's suffering from FOMO—Fear Of Missing Out—but technically that'd be a flawed assumption as he has already missed out on doing the race. So it must be ROMO—Reality Of Missing Out. I stop briefly and we chat. Nice surprise.

I'm on my way again and counting down the kilometres when I notice some lights just off the road to my left. I guess they're no more than 10 metres from the road. I'm trying to figure out why a farmer would put lights out for his sheep in the middle of nowhere. Very odd. It's a fleeting thought that barely touches sides as it wobbles down my thoughts passageway and staggers out the tradesman's entrance.

It's starting to get light and I see a district road merging from the left. This is the road you would take if you drove from Sutherland rather than weave through the farms on a bike. It's a critical landmark for me. Now I know I'm only a handful of kilometres away from a change of scenery. I'm so excited I punch the air and give out an audible whoop whoop which is not like me. This long straight boring road will soon give way to orchards and vineyards. It also means there's some climbing but that's okay.

As the sky lightens the temperature starts dropping. It's down to 12°C and I stop and put a jacket on. I really don't like the look of the sky. It reminds me of a cold mid-winter Freedom Challenge sky. The thought makes me shiver.

Finally I'm free of the grasp of the Tankwa Karoo as I ride into Matjiesrivier.
There's a long slow grind to the base of Bo-Swaarmoed Pass. The weather still looks uncertain with heavy cloud obscuring the top of the pass. As I get to the bottom of the pass the cloud lifts and I can see the twists and turns I'll have to overcome. I've never managed to ride this pass and am determined that today is the day that I'm going to conquer this beast. I'm 3/4 of the way up and I realise that I'm not in conquering condition. It's not a hard climb but my legs can't cope. My energy reserves are depleted and I'm running on fumes.

As I'm plodding up the pass I take out my phone to catch up on race chatter and see that I'm now 4th. Somehow Sithembiso has fallen behind me. That's weird. There's only one road from the Padstal to Matjiesrivier and I didn't see him. Hmm. Wait... The lights next to the road that I thought were sheep lights... I now have an explanation that makes sense. The next message I see is that Sithembiso has compounded his problems by going the wrong way. Advantage Mike.

2 minutes later I look back and I see 2 cyclists heading up the pass behind me. So much for my 4th place elation. They are too far back to see who they are but I'm guessing one must be Sithembiso and the other... I've no idea. They are pedalling up the climb I've just walked and making it look like they're on an easy Saturday morning ride. As they get closer I notice that they don't have Munga race boards and therefore aren't part of the race. They are in fact a couple out for their Saturday morning ride. We exchange a few words as they pass. They were surprised to see bike tracks when they started up the climb as they seldom see other cyclists out this way.

I'm at the top of the climb and onto the tar road. My sense is that I just need to roll down the road, cut through a farm section and I'll be in Ceres in no time at all. I look down at my Garmin. What!!! I've still got 40km to get to the Race Village in Ceres. That doesn't seem right. It's just down the road. Isn't it? No amount of wishing is going to make it less. I pedal up the first climb on the tar road. I can see the couple ahead of me. They are making it look far too easy. I know it's about 12 km to the turn off and most of that is downhill. Hill conquered I'm zooming along and my Garmin says I must turn left. It's nonsense. I know I don't have to go left this early and carry on. Then it starts squealing telling me I'm off course. I stop. The Garmin is confused but I'm too tired to argue so I play along. I go back and take a random farm road where the Garmin insisted I turn off. I've gone 30 metres and the Garmin tells me I'm off course again. I'm back on the tar and ignoring my Garmin. 100 metres on and it's happy again. Should have trusted my gut.

Soon I'm passing a community hall which means I should turn left in a few hundred metres. The Garmin ignores the turnoff that I've always taken and tells me to carry on. This is weird. I check the Garmin. Yup, I've gone 12 km. But the route on the Garmin clearly says I must carry on down the tar road. And it is down. Steep and fast down. Like a big effort to reverse if its wrong steep. I'm rolling along with one eye on the road and the other on my Garmin. I'm on track in spite of my reservations. Then I remember Alex saying something about a route change before Ceres. I should have paid attention.

At the 18 km mark there's a turnoff onto a gravel road and my Garmin suggests I take it. Still 22km to go. I don't remember wiggling through farms for so many kilometres and I've cut out a huge chunk by going further on tar. I get to the first climb and my legs are hollow. I'm empty. I crawl up the climbs and roll down the other side. I ride around in what seems ever decreasing circles and now I'm on a tar road that I remember. This is the last haul to town. It's flat fast and... not that short. I remember it being short but I've still got 11.5km to the Race Village. The distances on Garmin have been spot on with the distances I have on my cheat sheet so it must be every inch of those 11.5km. I summon a smidgeon of enthusiasm and manage to get my speed up.

Finally I'm through the centre of Ceres and at the race village. The food here is always good. Individually tailored and good. I'm empty, hungry and keen to fuel up for the final push. I head inside to see what's available.
Posted by Mike at 18:17