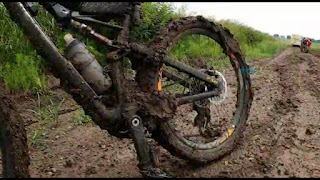 Shortly after the start the GPS directs us onto the railway reserve road. The weather looks like it might get damp but we're hopeful it'll just be light rain. They've obviously had recent rain because it's muddy and large puddles abound. For the most part we are able to route around all but the largest of puddles. We get to the first of many railway bridges which the HeidelBay veterans refer to as the 5 Arches Bridge. Here we find Niven who has deployed his drone and is filming us as we cross the river below the bridge. I've only ever Niven once before. I arrived in Ntsikeni late one night and Niven was still up and wandered through to the common area of the lodge. He is an avid supporter of the HeidelBay route and when he heard that we were going to give it a bash he asked if he could be a fly on the wall and record our trip.

The track on the other side has deteriorated since I was last here and we get a bit scratched up getting around the fence. The track opens up and we empty onto a district road that takes us through Balfour.

After Balfour we're back on a mucky track. In spite of our best efforts we have our first baptism of mud mixed with dodgy looking stuff. This scenario will be played out a number of times as we pass informal settlements along the way. I guess it's a combination of poor sanitation and the concentration of  animal husbandry that takes place on the periphery of the settlements.

As we progress the frequency of muddy stretches and water puddles increases. Even when not wet the going is hard as we roll over sodden earth. Fortunately the terrain is fairly flat which allows us to move at a good pace albeit not without some effort.

Approaching Greylingstad the jeep track is hemmed in by tall reedlike grass which whips against forearms with such force that it stings. We constantly switch sides on the jeep track to give one and then the other of our arms a break from the assault. When we get to Greylingstad we leave the jeep track and roll through town on tar before once again taking up position on a jeep track running parallel to the rail line. There's a settlement on the other side of the line and the rail ballast is doing a good job of allowing the watery waste to leach through. Our momentum is broken as we slow to pick our way around and through huge puddles of blackened water.

Soon we are back on a good and dry district road where we head toward the grain silos at Val. The sky is clearing and it's a gorgeous day. Once through Val we rejoin the service road and it's a bit muddy. Then it's a lot muddy. At one point the GPS route directs us onto a district road but we duck back to the safety of the service road which although not easy sailing isn't leg ripping mud.

I recognise the next set of silos up ahead where the original route was to the left. The route suggested by our Garmin's is to the right and I'm not keen to keep schlepping through the mud. I figure we can sneak around the left hand edge of the silos and rejoin the route on the other side. The plan goes well... briefly.

We thread through the derelict remains of the rail siding adjacent to the silos and pop out at the entrance gate. So far so good. The proper route is less than 200m away on the other side of the railway line and we've managed to avoid the muddy road. A stationary train stands between us and where we want to be. I track around the fence of the silos hoping to find a road or footpath that'll take us back over the line. Merak and Carlo foolishly put their trust in my nav skills.

The road heads away from the train line but I'm still hopeful that we will find a way back toward the line. All we find is a bus abandoned in the middle of the road. As we approach the bus the reason for it's abandonment becomes all too clear. It's bogged down in polisiehondmodder. The clay mud attacks our bikes and before long my bike is so clogged that the chain jumps off and the wheels are no longer turning. I look back toward the silos and suggest we get back there and find a way to cross the rails.

Once again we pass the bogged down bus. I sled my bike along the road. The wheels are packed solid with mud and they aren't going to turn. After a while I stop and scrape off enough mud that I can ride. There is a meilie field that runs up to the silo perimeter fence. A quick check confirms there is a jeep track running adjacent to the fence. I drop mud laden bike over the fence. Man it's heavy!

I regain my bike and pedal around the meilie field until I'm ahead of the stationary train and close to the rails. Once back on the service road I ride ahead until I can see a huge puddle of water. It doesn't matter that it's murky at least it's a lot less muddy than my bike. The three of us alternate between scraping chunks of mud off our bikes and splashing dirty water over the liberated bits and pieces.

It occurs to me that my plan to avoid a fairly muddy road resulted in us getting bogged down on a horrifically muddy road. In my attempt to save time I've flushed at least 30 minutes on this folly.