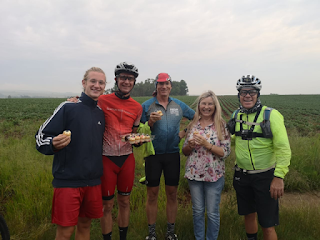 The Wimpy Mega Cappuccino goes down a lot easier than the Streaky breakfast. The foods not bad but I'm struggling to get it down. We've been on the go for 28 hours and the combined effects of exhaustion, sleep deprivation and heat have suppressed my appetite. The ebb and flow of life play out on the streets of Ulundi. It's Saturday morning and the narrow pavement on the other side of the window is pulsing with life.

We've only got 113km left to do of our 545km quest to ride non-stop from  Heidelberg in Gauteng to Richards Bay in Kwazulu-Natal. The route is mostly along the railway reserve jeep track. At Volksrust the railway line heads off toward Newcastle. At that point the cycle route deviates toward Wakkerstroom topping out at almost 2000m before dropping into Vryheid where it joins the rail line that runs from Ermelo to Richards Bay.

The idea of the route developed over time. Years back I joined Kevin Davie on a recce ride where he wanted to see how far he could ride in 24 hours along the rail route to Durban. His ultimate goal was to ride nonstop to Durban. He figured that for our exploratory ride we'd have to get beyond Newcastle. We managed to get through Newcastle before the egg timer ran out.

Shortly after I took Dave Bell for a spin along the route but before Standerton he'd had enough of rattling along the railway service road. It wasn't to his liking. Funny thing now is that he's a contributor and fan of the idea. Elton Prytz mapped out an alternate route that would end in Richards Bay. Niven chipped in and The HeidelBay 545 was born. Niven has the details here http://heidelbay.blogspot.com/p/the-challenge.html

113km to finish sounds easy enough but we are tired and we expect the next section to be as lumpy as our ride into Ulundi. I'm not looking forward to more of the same. This section of the route is described by many as being beautiful. It is stunning but I imagine it looks a lot nicer through the window of a car.

I look across to Merak who is also chasing his food around his plate.

"Maybe we do stuff like this so that our mates think we are amazing?" I proffer.

"That makes us really shallow," I add.

We leave the why unanswered.

This is our second attempt at doing the HeidelBay ride. Our first attempt in September 2018 fizzled out near Utrecht when we rode into the mother of all storms. That failure in some way is our unspoken why. We can't go 0/2.

Our Heidebay challenge started opposite the Yesterday Today and Tomorrow guesthouse outside Heidelberg. Carlo had opted for a good nights sleep and had stayed at the guesthouse. As we stopped next to the road we saw him pedalling up the driveway with his overnight bag balanced on his handlebars.

Merak and I unloaded our bikes and got them ready. I, as usual, wasn't well prepared and I picked through a bundle of clothes and equipment trying to decide what I should or shouldn't take. In the end I tossed it all back in my backpack. Rather too much than too little.

Oliver was supposed to ride with us but he was down with lurgy and not in riding shape. It was his birthday so standing next to the road we celebrated his 18th birthday with cup cakes. At 06:06 we hopped on our bikes and set off toward the sea.